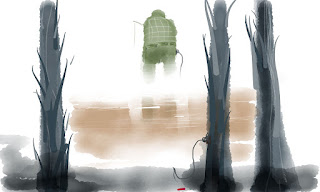 Dear friends of foreign stories.
Today, I´d like to tell you about a double experiment: writing a short story in english and letting a picture tell me what to write. Benjamin Rabe, a fingerpainting-artist from Hamburg, is publishing a tiny magazine about „mobile art, fluffy animals and other disruptive culture stuff.“ This nimble iPad magazine is called, well, „The Nimble Magazine“ – and it´s great. One day, we talked about how his visual work is inspired by a good read, and I was excited about trying this the other way round. Simply because I like his pictures. So he sent me a painting he has drawn on his iPhone and I tried to figure out what the story behind this picture could look like. Let´s call this process „image inspired imagination“. Or call it a visual kick in the ass for getting your words together in case of non-self-inspiration. You can read „Unfinished Sympathy“ in the latest issue of The Nimble Magazine. Or you can read it here, below. But you should check Benjamins page anyway, otherwise something will be missing in your disruptive search for cultural newism. So here´s the story about Pete and Peggy …

Once again, the world lost its darkness. Black turned blue. Water steaming up into the air, moving slowly over the lake´s surface. Sea smoke, like a cloud that fell down. Like our dreams, Pete thought and closed his eyes. He knew what was about to come. Soon the fog would be gone, revealing a clear view onto the scenery. Just because you can´t see it, doesn´t mean it isn´t there. It just moved, he already felt the fog approaching. Entering his head. He took a deep breath. Laid back in his rocking chair.

If you don´t sleep, you can´t have nightmares, Peggy said in a rasping voice, rearranging the blanket on her lap.

Not quite sure about that, Pete answered, his eyes followed the wavy fog dancing above the lake. As if the water was beginning to boil.

Birds. Invisible, but they´re here. You can tell by their chanting, slicing the silence. Warning every soul of the brightness to come. Telling the world that the quiet would be over soon.

Peggy cuddled up in her chair, pulled the blanket up to her neck. A little bug crossed the terrace. It had no direction. Peggy watched it moving left, stopping, turning right, stopping. Then it scuttled away quickly, disappearing behind the fence.

I´ll get my things, Pete said, his mouth barely opened. He stood up with a sigh, leaving the rocking chair moving back and forth without him. Then it stopped. As if he had never sat there. The door squeaked as he opened it.

In fifteen minutes there would be a glowing orange, rising. The clouds always see the sun first. Adorning themselves with pretty to watch illuminations. Slowly the fog would disappear. Pete felt this way far too often, pulling away the curtain and being blinded by white trash. His eyes had become more light-sensitive over the last years. Photophobia, the doctor calls it. The doctor is always good at finding words, but fails to help eliminating the pain. One day Pete decided to invert his daily routine, going to bed when the light hits the sky and beginning his day when the sun sets. Sometimes he hardly sees Peggy in days. What struck him most about this distance was that it didn´t bother him. They didn´t talk much recently. The unbearable lightness of eloquent silence took over. Things had changed.

He headed for the cubby to collect the stuff he needed for his pre-bedtime activity. A routine that soothed him down, made his eyes heavy, prepared him for leaving the day. Like a lullaby.

Pete took his tackle box off the shelf, he restocked the lures a few days ago. He grabbed his fishing rod and turned towards the empty shoe rack. Raised his eyebrows as he couldn´t find his boots.

He went back to the living room, grabbed his phone from the side table, opened the ThingLocator, cleared his throath and spoke: “rubber boots”. A floor plan of their house appeared, a blinking dot in the lower right corner of the display, zooming in. “Your rubber boots are in the bathroom, ground floor”, a female voice said. Pete shook his head. He remembered cleaning his boots yesterday and leaving them in the shower tub. He wondered why Peggy didn´t complain. She always asks him to clean up his mess and put the things back to where they belong. “You seem to be stressed”, the voice said calmly. “You should do something relaxing”. Jesus, Pete thought, and closed the program, have to turn off that stupid mood recognition feature.

He put on his clean boots, dropped the phone back onto the table, grabbed his sunglasses and left the house. Door squeaking. Heavy thuds as his boots hit the wooden stairs. Peggy watched him go by slow-paced.

Pete reached the shore, prepared his fishing rod and went into the water. It vibrated. Circles on the surface, moving towards the lake´s center.

His upper body twisted, then moved forward quickly as he cast a line. He saw the upcoming light in a dimmed brown. The glasses gave him some extra minutes before the light was too bright to bear.

A bird flew by, saluting him, disappeared. Pete smiled, then shivered. A sudden headache killed his mental balance and reminded him of the naked truth. He had things to take care of. Before it would be too late. He had to take the pressure off Peggy, as far as he was able to. Next week he would start making arrangements.

Another bird followed the first one into the trees. Up in the sky, where all the struggles and the quarrels below seem so miniscule.

Pete travelled into the past. The day he met Peggy. Half a century ago. He watched the fishing line vibrating over the surface. Time makes us weak, he thought. Time is killing us all, sooner or later. He remembered the millennial hype, people getting crazy about the new century. Rockets in the sky. They nearly missed the transition. The greasy couch they sat on. The moment he first laid his hands around her neck, she seemed indifferent. Flooded with bravery he let his hands wander around at snail´s pace. And then she backed away from him. He still can hear her protesting: Watch out, my boy, you have the wrong coordinates. But he tried again. And again, and again. It took him four weeks, five letters and more than 20 phone calls to get from harsh refusal to the first kiss. It was all worth it.

25 years. Pete shook his head in disbelief. There is an end to everything. Nature always seems indifferent to what it does to people.

Sunrise was beginning to create amazing shapes. Trees began to glow behind the far end of the lake, like shadows of arrows reaching at the sky. Calm water, the sun´s reflection cut the lake in half by a giant yellow streak. The dawn of a new day. Or the end. It all depends. The yellow streak looked like a bridge, crossing the water from one shore to the other. We always need a bridge, Pete thought, always will. He turned around and saw Peggy sitting on the terrace, he lifted his hand and waved. Communication is easier when you´re not face-to-face.

Peggy saw him and waved in return. Her eyes filled with tears. She rubbed her arm. The wispy hair on her skin, like smooth thorns growing from the flesh. Her heart felt heavy, torn apart by the unspoken, but ever-present truth.

Just a routine checkup, the doctor said. The diagnosis caught them completely unprepared. Two months, the doctor said, maybe four. Six at most. Pete didn´t show any reactions at first. He didn´t talk about it. He simply changed.

Pete watched the sun climbing up. Better get to bed soon, he thought. His head fell on his chest. He saw his face in the water, a shadow in motion, without contour. Looked into the mirror of introspection and didn´t find an answer. There is none, his shadow said, there is just the truth, in all its colourful variations. And that´s it.

His eyes wandered over the lake´s surface and he faced a total lack of boundaries. Everything was possible around here. The feeling of freedom scared him. We always need boundaries to make sense of the world, to structure the pieces of what we call life.

He felt a small resistance and set the hook hard. Hoping for a big catch. A tenpounder maybe. Oh god, when did he last get one. A rush of adrenalin flooded his body. What a way to end the day, Pete spoke out loud to himself.

And then he saw the water disappear. Within seconds, he found himself stuck in the slobbery mud. All water gone. He looked up, eyes wide open, filled with surprise. Then the sky turned white. A drastic white. There was no difference between the water and the sky. All white. He ripped of his sunglasses and threw them away. His eyes screamed. The pain was everywhere.

And then there was nothing.

In the end, when the sun sets, we will fly to heaven and look at the clouds from above. From a different perspective. We will illuminate the clouds with our sparkling souls, the most beautiful colours. Finally, we will be unglued from the earth´s profanity. Up and away. I will be there, my dear, long after the fog has dazzled my mind, long after my body has been worm-eaten. I will be there, looking for a tiny little piece of your heart to take with me. So small, you won´t miss it. 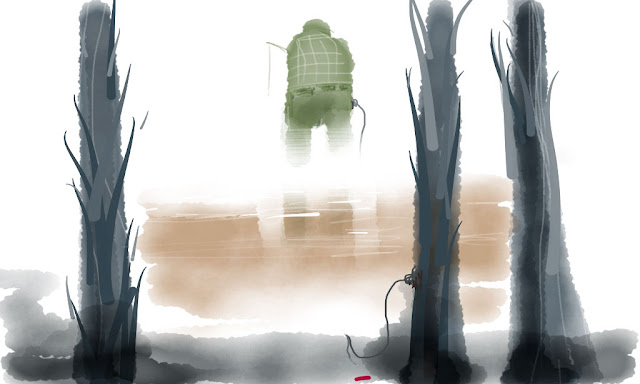